SHIMEN RAVIDOVITSH (SIMON RAWIDOWICZ) (October 11, 1896-July 21, 1957)
He was a Hebrew philosopher of history and journalist, born in Grayeve (Grajewo), Poland.  He wrote groundbreaking research on the philosophy of Jewish history, Tanakh, Rambam, Saadya Gaon, Nachman Krochmal, Jewish Enlightenment literature, and problems of Israel and the diaspora.  Although he was the founder of the Hebraist “Brit ivrit olamit” (“World Association for Hebrew Language and Culture”) in 1931, he always had a positive attitude toward Yiddish.  After establishing the doctrine of equivalence between Israel and the diaspora (he at first used the term “tefusot” rather than “galut” for diaspora), he was moving closer all the more to the Yiddish realm.  He began writing in Yiddish in 1919, when he was editing the Zionist socialist weekly newspaper Unzer frayhayt (Our freedom) in Berlin.  He translated Arn-Dovid Gordon’s Brif fun erets-yisroel (Letters from the land of Israel) (52 pp.) and E. L. Yofe’s Arbayter zidlungen in erets-yisroel (Workers’ housing in the land of Israel) (112 pp.), both (Berlin, 1921).  He also edited Dos pyotrkover yidishe leben (Jewish life in Pyotrków), a one-off publication.  In the 1930s, he published from time to time in Yiddish.  More frequently and more systematically, he began writing in Yiddish in 1948, after his arrival in the United States.  In Tsukunft (Future), he published numerous articles of significance on contemporary Jewish cultural issues, especially on his philosophy of the diaspora.  He wrote no basic works in Yiddish, as he did in Hebrew and German.  His sole book in Yiddish, Shriftn (Writings) (Buenos Aires, 1962), 441 pp., includes his most important works translated from Hebrew.  He died in Waltham, Massachusetts. 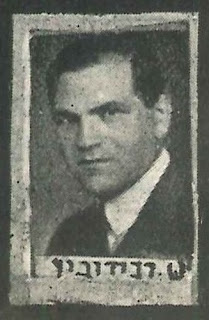