TALUSH[1] (May 17, 1887-July 7, 1962)
He was a story writer, born Iser Muselevitsh in Dvinsk (Daugavpils), Latvia.  He was orphaned in his youth.  He wandered along the Volga River and for a time lived there among vagabonds.  He learned Russian and left for abroad—Switzerland, Paris, twice in the land of Israel, performing hard labor everywhere.  In 1920 he emigrated to New York.  In 1925 he founded the publishing house of Tsvaygn (Branches) for booklets.  He spent his last years in Miami Beach.  He began his literary work in 1909 in Russian, and in 1920 he turned to Yiddish with a novel appearing in Tsukunft (Future) in New York; it was entitled Fremde (Stranger), and in book form it was titled Der yam roysht (The sea rushes).  He was a regular contributor (1920-1921) to the daily newspaper Di tsayt (The times), later placing sketches and stories in Tog (Day), Morgn-zhurnal (Morning journal), Forverts (Forward), Tsukunft, Amerikaner (American), Gerekhtigkeyt (Justice), Fraye arbeter-shtime (Free voice of labor)—all New York—and Eygns (One’s own) in Bayonne, among others.  Talush’s sketches were often reprinted in the Polish Yiddish provincial press.  Several of his stories were translated into French, German, and English, among them “L’étranger” (The stranger), “a tale of the new Jewish life in Palestine.”  One story drawn from the life of the pioneers in the land of Israel was dramatized under the title “Der falfalener” (The lost one).  His work appeared as well in Mordekhai Ḥalamish, ed., Mikan umikarov, antologya shel sipure yidish beerets yisrael (From near and from far away, anthology of stories in Yiddish in Israel) (Merḥavya, 1966).
His writings include: Der yam roysht, dertsehlungen un skitsen (The sea rushes, stories and sketches) (New York: Kultur, 1921), 378 pp.; A zump, ertsehlung fun amerikanem idishen farmer leben (A marsh, a story from the life of an American Jewish farmer) (New York: Zangen, 1922), 73 pp., later edition (1924); Der kholem, dertseylung (The dream, a story) (New York: Tsvaygn, 1925), 16 pp.; Ven mir zaynen kinder geven, eskizn (When we were children, sketches) (New York: Tsvaygn, 1925), 16 pp.; Der bilbl, drama (The blood libel, a drama) (New York, 1929), newspaper clippings from published chapters in Fraye arbeter-shtime; Der bunt (The rebellion) (Warsaw: Kh. Bzhoza, 1936), 288 pp.; Voglenish, roman (Wandering, a novel) (Warsaw: Literarishe bleter, 1938), 560 pp.; Yidishe shrayber, derinerungen un fartseykhenungen (Yiddish writers, memoirs and notes) (Miami Beach, 1953), 319 pp.; Mayn tatns nign, dertseylungen un skitsn (My father’s melody, stories and sketches) (Buenos Aires: Der shpigl, 1957), 319 pp.  He used the pen name Noytman for the humor page of Forverts.  In English: The New Bethlehem (New York, 1936), 281 pp.  He died in Miami Beach.
“Behind every one of Talush’s stories,” wrote Borekh Rivkin, “there is pantomime and shadow play, which can be narrated and displayed without words….  He introduces into the events…his solitude—the solitude of one who is all by himself in the world….  He seizes the solitary ones, makes them even more lonely, borrows their unhappiness, and the joy of loneliness—befalls them.”
“Talush, the convert to our literature,” noted A. Mukdoni, “…brought with him from Russian literature the search and discovery in human disquiet, longing, and perpetual haunting….  Talush…paints with the quietest of colors.  Often the colors are so quiet that…only a sharp eye will even notice them.” 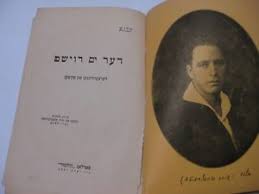 Talush in the frontispiece to his book, Der yam roysht

[1] He was given this pseudonym by Zalmen Shneur in 1918 as a characterization of his life at the time—no home, no country, a wanderer.