PERETS OPATSHINSKI (PERETZ OPOCHINSKY) (1895-1943)
Born in Lutomirsk (Lutomiersk), near Lodz, into a family of Gerer Hassidim.  He was left an orphan while still young, and at age ten he traveled to study at the yeshiva in Lask, and thereafter in Kosove.  At twelve he began to compose poetry in Hebrew.  He worked as a boot maker and later an employee in a business in Lodz.  He left for Germany to enter the rabbinical seminary in Frankfurt.  Due to material constraints, though, he was forced to return home.  He settled in the factory town of Kalish where he became acquainted with the writer Asher Shvartsman, who was serving there in the Russian military.  Under his influence he undertook to write poetry in Yiddish.  After WWI which took him by surprise and during which he fell into German captivity, he wrote sketches and stories about his life as a prisoner of war.  He became a Hebrew teacher and later mastered shoe-making on his own.  He then settled in Lodz where he made a living from this trade, though he never stopped writing, becoming a contributor to Lodzher tageblat (Lodz daily news), and there he published sketches and stories about Hassidic life.  Together with the editor, Shaye Uger, he published Ilustrirte lodzher vokhnblat (Illustrated Lodz weekly), and he also published poems in blank verse in Moyshe Broderzon’s Yung-yidish (Young Yiddish) and in Varshever almanakh (Warsaw almanac) (1925).  He traveled to Warsaw and became a contributor to Unzer vort (Our word) which was put out by the Labor Zionist Party.  He also published stories in Lodzher folksblat (Lodz people’s news) and Unzer ekspres (Our express) in Warsaw.  Some of his reportage pieces appeared under the pen names: Moyshe Mekhuyev, Perets Opotshner, and Perets Khoside.  Following the outbreak of WWII, he stayed in Warsaw and together with all of the Warsaw Jews was confined in the ghetto.  There he became a letter-carrier, and later an active contributor to “Oyneg shabes” (the underground archive led by Dr. Emanuel Ringelblum).  When the archive was excavated after the war, people found, among other things, numerous works by Opatshinski.  He died from typhus in the ghetto.  His wife and only child were murdered.
Among his books: Na vanad (Wanderer), published by the author (Perets Opotshner) (Lodz, 1933), 32 pp.; Gezamlte shriftn, mit a biografye fun Rina Oper-Opatshinski (Collected writings with an biography by [his sister,] Rina Opatshinski) (New York, 1951), 204 pp., and with responses to his works by Y. Katsenelson, Dr. Y. Margolin, Dr. A. Mukdoni, M. Broderzon, Kh. Krul, and Sh. Tenenboym; Reportazhn fun varshever geto (Reporting from the Warsaw Ghetto), with a preface by B. Mark (Warsaw, 1954). 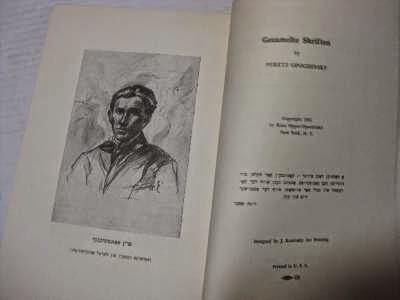