Literary name of Malke Lifshits, she was born in Minsk, Byelorussia, into a well-to-do merchant, modern scholarly home.  She took the surname Frumkin from her first husband; her second husband was surnamed Vikhman.  Her grandfather was a Hassidic rabbi and scholar, while her father was a follower of the Jewish enlightenment movement, an accomplished man, who wrote Yiddish poetry and prose.  Her mother came from the Katsenelenboygn and Rom (Romm) families of Vilna.  Until age eleven, Ester studied Tanakh in the original.  After graduating from high school in Minsk, she entered the Bestuzhev Course in St. Petersburg, later also an auditor in the University of Berlin.  Back in Minsk, she worked for several years as a teacher in the Minsk Professional School for Girls.  In 1901 she joined the Bund, and she became active as a party propagandist.  For her first literary piece of work, she translated into Yiddish Vladimir Korolenko’s story, “Di agode fun kinig agripes un flores, dem procurator fun yehude” (The story of King Agrippa and Flora, procurator of Judea) (St. Petersburg: Naye biblyotek, 1904)—Rus. “Skazanie o Flore, Agrippe i Menakheme, syne Yegudy” (Story of Flora, Agrippa, and Menakhem, son of Judea).  After the Russian Revolution of 1905, she began to play a conspicuous role in the Bundist movement.  She was the Duma correspondent in St. Petersburg for the Bundist daily in Vilna, Der veker (The alarm), later Di folkstsaytung (The people’s newspaper).  She also participated in editing the Vilna collections of the Bund: Di naye tsayt (The new times), Tsayt-fragn (Issues of the times), Di naye shtime (The new voice), and Fragn un lebn (Issues and life) in which she wrote under the pen name of D. Katsenelenboygn, and among many other things she published her work on Jewish national education and school issues.  She took part in the Czernowitz Language Conference in 1908, and there she represented the position of “proletarian” Yiddishism, calling for Yiddish to be declared “the”—not “a”—national language of the Jewish people (she published a report from the conference in the collection, Di naye tsayt 4 [Vilna, 1909]).  In 1910 the Bundist publisher, “Di velt” (The world), in Vilna brought out her major work: Tsu der frage vegn der yidisher folkshul (On the question of the Jewish public school) (third printing, St. Petersburg, 1917).  Over the years 1910-1914, on several occasions she was arrested, escaped abroad, and became active there as a member of the foreign committee of the Bund.  At the start of WWI, she returned to Russia—and she was sent at the time of the war to Chervony Bor, Astrakhan district, in the Russian North.  After the February Revolution of 1917, she returned to Minsk, joined the Central Committee of the Bund, became editor of the principal Bundist organ, Der veker (a daily newspaper), and was selected to the Minsk city council as well as the Jewish community; she became the director of the education office of the city and the province; she ordered the building of new Jewish schools, teachers’ courses of study, and cultural associations; she was on the managing committee of the workers university and lectured there on the nationality question; she wrote a great deal, frequently appeared on stage giving speeches, and truly stood at the center of social, political, and cultural activities of the city.  At that time, as was the case earlier, she belonged to the Menshevik wing of the Social Democratic Party.  Following the eleventh congress of the Bund (Minsk, 1919), she moved to the left and became one of the most active propagandists who sought to Bolshevize the Bund.  After the split up of the Bund in April 1920, she (together with Arn Vaynshteyn-Yerakhmiel) became the leader of the “Kombund” (Communist Bund).  At the Kombund’s dissolution conference in March 1921 in Moscow, she helped bring an end to the Kombund and moved fully over to the Jewish section (Yevsektsiia) of the Alfarbandishe komunistishe partey (All-Union Communist Party [=Bolsheviks]).  She also became a member of Yidgezkom (Jewish Social Committee [for the Relief of Victims of War, Pogroms, and Natural Disasters]) and a member of the editorial collective of the Moscow-based Communist newspaper Der emes (The truth) in which she published a great number of articles, principally about cultural issues, educational problems, and the new way of life.  She published theoretical articles in books, and together with Moyshe Litvakov, edited the eight-volume edition of V. I. Lenin’s writings in Yiddish, by herself translating the third volume [see below]; and wrote Lenin, zayn lebn un zayn lere (Lenin, his life and his teachings). In 1922 she was named to the post of vice-rector of the Communist University of the National Minorities of the West (under the Comintern) which the Jewish students there referred to as the Mayrevke, and in 1925 she became rector. The university was shut down in 1936, and within it an institute of foreign languages had been founded with Ester as rector. She worked there until her arrest on January 25, 1938. She was initially sentenced in July 1940 together with a group of former leading figures in the Bund to eight years of exile. She was sent to a camp near the city of Karaganda (Kazakhstan), where she died in the camp hospital on July 9, 1943. 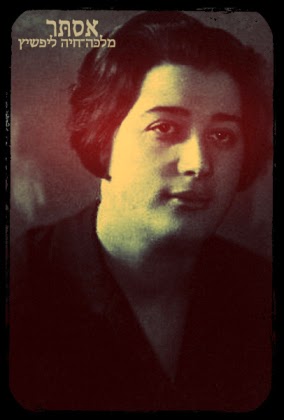