BOREKH OSTROVSKI (BARUCH OSTROVSKY) (October 10, 1890-July 16, 1960)
Born in Zvenigorodke (Zvenyhorodka), Kiev district, a grandson of R. Pinkhes Koretser.  He studied in religious schools, later becoming an independent university student.  He visited Palestine in 1912 and emigrated to the United States in 1913.  He was active in the Labor Zionist movement.  He worked as a teacher in the first National Radical School, participating as well in the school movement of Workmen’s Circle, and for a certain time he was director the A. R. Middle School.  He edited such periodicals as: Di yidishe-sotsyalistishe monatshrift (Jewish socialist monthly writings), Proletarishe shtime (Voice of the proletariat), Proletarishe gedank (Proletarian idea), Yunger yidisher kemfer (Young Jewish fighter), Yidisher kemfer (Jewish fighter), and Yidisher kongres (Jewish congress).  In 1930 he settled in Palestine.  Over the course of twenty-five years, he was the mayor of Ra’anana.  He began writing Hebrew sketches and stories for Hayom (Today); his Yiddish writings appeared in Varhayt (Truth), Tog (Day), Yudishe folk (Jewish people), Yidisher kongres, and Der veker (The alarm).  For many years he was the correspondent in Palestine for the Forverts (Forward) and Tog in New York.  His books include three textbooks entitled Yidish (New York, 1920-1922).  Among his pseudonyms: Dr. B. Shtilman, B. Alef, B. Feygin, A. Kolektiv, and A. Rotshever.  He died in Ra'anana. 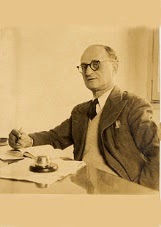