HERTSL APSHAN (1886-May 10, 1944)
Born in the village of Remit (Remete), near Sighet, Hungary, to a father who worked as an itinerant religious teacher.  He studied in religious schools through high school in Hungary.  He taught himself some German and Hungarian, later working as a bookkeeper.  During WWI, he served in the Hungarian army.  He returned and settled in Sighet after the war, doing business and working until the end of his life as an insurance agent.  He began writing in 1931 for the Orthodox press in Hungary and Transylvania.  He wrote about the Spinker rebbe’s court in Yidishe tsaytung (Jews newspaper), edited by A. Vays, of Sighet, as well as in Vilner tog (Vilna day), edited by Zalmen Reyzen.  Among his books: Volf shoykhet der shtudent (Wolf Shokhet, the student), a novel (Sighet, 1936); Beys yisroel, vizhnitser rebens hoyf (House of Israel, the court of the Vizhnitser rebbe) (self-published: Sighet, 1939), 254 pp.  In the latter work, he described in a living popular language of the Jews of Sighet the habits and customs of the Vizhnitser rebbe’s court.  Through the images, full of artistic observations and humor, one can see the entire way of life of the Jewish corner that was rarely described in Yiddish literature.  The critic Dr. Sh. Bikl correctly dubbed Apshan the “Sholem-Aleykhem of Hungary.”  The good-natured smile of a genuine humorist shines forth in his novels.  In May 1944, together with all 14,000 Jews of Sighet, he was sent to Auschwitz where on May 10, 1944 he died a martyr. 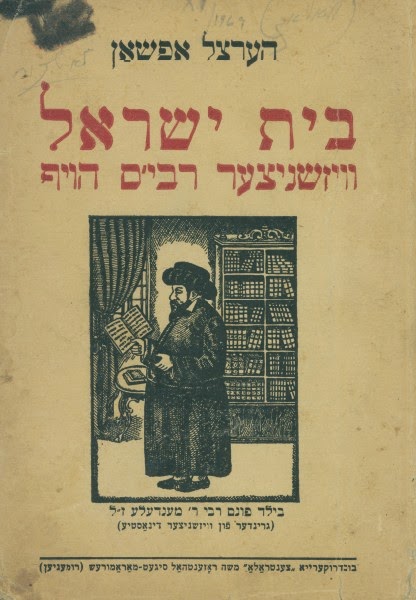