DOVID (DAVID) APOTHEKER (August 28, 1855-October 23, 1911)
Born in Ponevezh (Panevezys [Lithuania]).  His father was a Maskil.  At age ten he became a student in the yeshiva of Moyshe-Leyb Lilienblum in Vilkomir [Ukmergė], and later he was a free auditor at Kiev University.  In 1879 he was arrested for revolutionary activities.  He escaped from exile and settled in Czernowitz.  In his youth, he wrote in Hebrew.  In 1881 his first work in Yiddish was published in Czernowitz: Hanevel—di layer, tsen sheyne folkslider iber di vikhtigste fragen der yuden, af hebreish und yudish-daytsh mit zeyer sheyne melodyen (The lyre, ten beautiful folksongs on the most important questions for Jews in Hebrew and Judeo-German with very beautiful melodies)—the first specimen of enlightenment-socialist, rhymed, educational current events pieces in Yiddish.  At the same time, he also published a satirical booklet entitled Sefer ha-tikun, Shukhan orekh hilkhot tikun (Book of improvement: the prepared table, laws on remedies), and he contributed periodical writings in Yiddish, Hebrew, and German.  In 1888 he emigrated to the United States.  After an unsuccessful effort to found a communal colony, he later founded and led over the course of three years a union in Brooklyn that he managed with a women’s clothing shop on the basis of cooperative principles.  He opened a publishing house and began to print such humorous and satirical newspapers as Di baytsh (The whip) and Di fledermoyz (The bat), as well as such weeklies as Di naye heymat (The new homeland) and Dos folksblat (The people’s paper) (1889).  He collaborated with Moris Veksler’s Nayeste post (Newest news), and with the anarchist Varhayt (Truth), Tageblat (Daily news), and Folks-advokat (Advocate for the people), among others.  In 1895 he settled in Philadelphia and founded a weekly magazine entitled Di gegenvart (The present) in which he published a novel about Jewish American life, Di farblondzhete (The lost ones).  He took part in Jewish community life in Philadelphia.  He founded dramatic associations and philanthropic institutions, and he was active in the trade union movement.  In 1909 he edited in New York a collection entitled Di yidishe bine (The Yiddish stage).  In 1910 he collaborated with such humorous magazines as Der kibetser (The joker) and Kundes (Prankster) using the pseudonym “Der hungeriker shlimazl” (The hungry ne’er-do-well), and published poems and songs in Varhayt.  In 1910 he published his book, Humoristishe shriftn (Humorous writings) (New York), vol. 1, 300 pp.; vol. 2 appeared in 1912.  He left behind in handwritten form an entire series of theater pieces, dramas, comedies, and vaudeville pieces: Kutshme (Mop of hair), Gayster (Spirits), and In a shvakhn moment (In a weak moment).  Amateur troupes have at different times performed his works: Der letster shtrayk (The last strike), Meshiekhs tsaytn (Messianic times), Gumpls seyder (Gumpl’s seder), and Der anarkhist (The anarchist), among others. 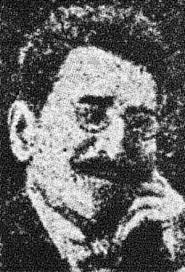