is not only the longest and the most ambitious in structure and form of all of Sutzkever’s works to date, but it also excels in that more than in any other poem, Sutzkever accomplishes in it the artistic level of ‘an emotion suggested quietly’; without the tranquility of this emotion of his, without the artist’s self-restraint, he would be unable to succeed in his principal objective of this poetic creation—the goal of transforming pain into light—because he concentrates here on the infinite pain of the Vilna ghetto and of all other ghettos, and if the artist with the magic and strength of his artwork ought not restrain and arrest his cry of violence, his lament, and his howl, not only will pain not give way to light, but the pain itself will not emerge….  Clay from graves will be enough for the figure of the liberator who arrives after the liberation—that tells the younger artist of the sewers about himself.  As we read “Geheymshtot,” we say the same about Avrom Sutzkever—about this wonderful man who, lying in a coffin as a corpse, wrote poetry of life—and poetry of belief.  He also, we would say, in view of Tamares Yulik “created from the grave’s damp clay…his own wondrous reality in a corner—a figure of Moses to shine before the generations.”  For the generations and for our own generation.  He has become for our forlorn and resigned generation the messenger, the announcer of good tidings….  Right from the ghetto, from the hiding places, from the graves, from the subterranean sewers, he has come, the messenger blessed by God and by men. 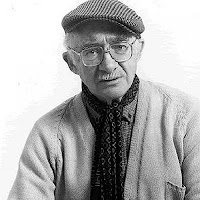