HERTS BURGIN (SHMUEL) (August-September 1870- November 4, 1949).
Born in Motol (Motal), Vilna region, after his bar mitzvah he studied with Rameyle’s circle in Vilna.  He later graduated from Tsunzer’s Russian Jewish school, and in 1892 from the Jewish Teachers’ Institute.  In 1897 he became a teacher in Riga and at the same time one of the pioneers of the local workers’ movement.  He began his literary activity as a correspondent for Voskhod (Sunrise) in Russian.  In 1899 a polytechnical institute came to Riga, and he was excluded from entering because of his participation in student unrest.  In 1903 he was sent for five years to eastern Siberia.  He escaped, from there abroad, however, and at the end of 1903 he arrived in New York, where he began to contribute to Aleksandrov’s Fraye shtunde (Free hour) with translations from Hebrew.  From 1906 he contributed, with occasional breaks, to Forverts (Forward) and Tsukunft (Future) until around 1925.  He wrote as well for other Yiddish magazines and for the local Russian press.  Simultaneously, he published correspondence pieces in Russian newspapers in Moscow and Odessa.  He edited socialist periodicals.  In 1913, at the invitation of a committee of the United Jewish Unions, which were then celebrating twenty-five years of their existence, he wrote Di geshikhte fun der yidisher arbayter-bavegung in amerike, rusland un England (The history of the Jewish labor movement in America, Russia, and England) (New York, 1915), 935 pp.  He was a member of the national executive and education committee of the Workmen’s Circle, and he later became one of the leaders of the left wing of the Socialist Party.  Later still he entered the Communist Party and contributed numerous articles to Frayhayt (Freedom), later known as Morgn-frayhayt (Morning freedom).  He also contributed to Yidishe kultur (Jewish culture) in New York.  Among his pseudonyms: H. B-n, H. B., Ben-ester, S. Pevzner, A. Moloter, D. Molot, Sebezh, Imyarek, Yanka, and others.  In manuscript there is a new, complete text of his Di geshikhte fun der yidisher arbayter-bavegung in amerike, rusland un England.  Other books by him include: Di trosts un zeyer badaytung (The trusts and their significance) (Philadelphia, 1909), 64 pp.; Lerbukh fun arifmetik (Arithmetic textbook) (New York, 1919), 317 pp.  Translation: Lenin, Arbeter un frayhayt (Workers and freedom), together with M. Osherovitsh (New York, 1919), 270 pp., second printing (1921).  He edited: Tsaygayst (Spirit of the times) (New York, 1906); Novyi mir (New World), in Russian (New York, 1911); the Communist weekly Der kamf (The struggle), together with F. Gelibter); Funken (Sparks), Proletarye (Proletariat), Emes (Truth), and Iskra (Spark, in Russian), all in New York, 1919-1921. 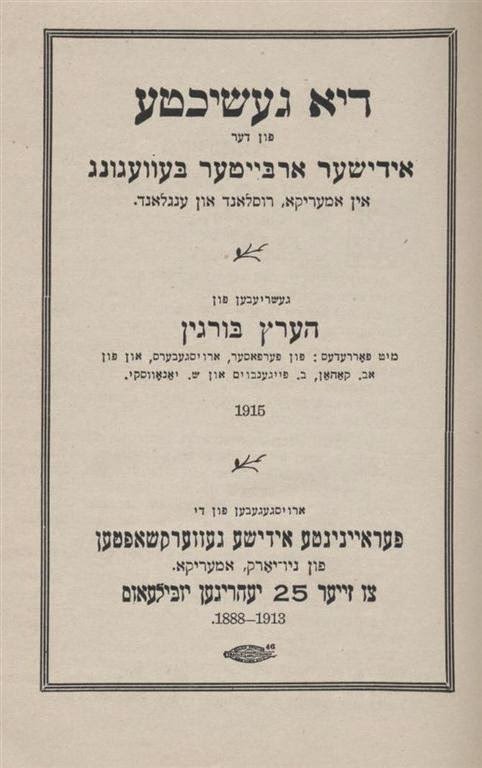 Frontispiece of Burgin’s
“History of the Jewish Labor Movement in America, Russia, and England”