ZISHE BAGISH (d. January 20, 1944)
Adopted name of B. Vaysman, he was born in Lodz into a rabbinical family.  The date of his birth is unknown.  Between the two world wars, he was ideologically tied to the Communists.  He lived in Belgium, France, and Romania.  In 1937 he returned to Lodz, and in 1938 he settled in Bialystok.  He edited the periodical Der yingl (The young man) until the war broke out in 1939.  During the Soviet occupation of Bialystok, he was for a short time secretary of the Jewish writers union.  When the Germans took Bialystok, he remained in the Bialystok ghetto, and later in Birkenau next to Auschwitz.  As reported by Refuel Rayzner (Der umkum fun byalistoker yidntum, 1939-1945 [The destruction of Judaism in Bialystok, 1939-1945] [Melbourne, 1948]), Bagish voluntarily surrendered himself to death in the gas chambers, so as to save those younger and healthier than he.  His publications appeared in: Literarishe bleter (Literary leaves); Oyfgang (Arise) in Sighet, Hungary; Byalistoker lebn (Bialystok life), a Soviet Jewish publication (1939); Radyo (Radio), an afternoon publication from Moment (Moment) in Warsaw in which he published a biographical novel entitled “Lenin”; Der veg (The way) in Mexico (1939) in which he published one of his last poems entitled “Tsu mayn yidish folk” (To my Jewish people).  Among his books: In shtubikn vandl (Wandering within), poems (Antwerp, 1931); Lernt lib tsu hobn s’lebn, lider un plakatn (Learn to love life, poems and posters) (Brussels, 1935), 96 pp.; Dos gezang fun neger-folk (The song of the Negro people), translations (Chicago, 1936), 44 pp.; Portretn (Portraits) (Bucharest, 1937), 89 pp.; Khinezish (Chinese), translations (Chicago, 1938), 73 pp.; In kinderland, lider (In a children’s world, poems) (Warsaw, 1938), 16 pp.  He belonged to the modernist turn in Yiddish poetry. 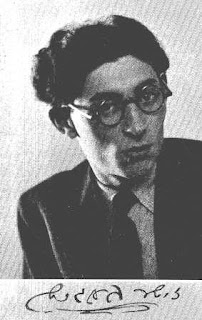