PESI BAKH (PESSIE BACH) (b. 1903)
Born in Dvinsk (Daugavpils).  Her father was a teacher.  In 1917 she arrived in the United States.  In 1918 she began working in a sweatshop.  In 1924 she studied to become a teacher at the Workmen’s Circle.  Later she worked as a teacher in a Workmen’s Circle school, thereafter in schools of the International Workers Order (IWO).  She first published stories in Frayhayt (Freedom) in 1926.  She wrote about workers’ lives, about Jewish women of her day, and also about blacks.  Among her books: Fun a meydls togbukh un andere dertseylungen (From a young woman’s diary and other stories) (New York, 1941), 191 pp.; Yung lebn, dertseylungen (Young life, stories) (Cleveland, 1950), 188 pp. 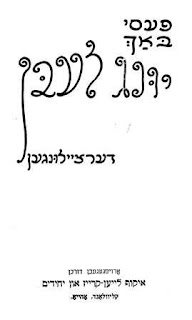