ZEV BAUMGOLD (b. July 5, 1908)
Born in Lodz, Poland.  From early childhood, he was active in the Hitachdut Party [a socialist Zionist workers party].  He moved to Paris in 1929 to study jurisprudence.  He was a delegate to the Zionist Congress, and he took part in Parisian Jewish social life.  He was the national director of Poale-Tsiyon in France, 1937-1941.  In the 1930s he served as the Parisian correspondent for Lodzher folksblat (Lodz people newspaper) and Davar (Word), a contributor to the Parisian Tog (Day), and a cofounder and editorial secretary for Poale-Tsiyon’s weekly Undzer vort (Our word) in Paris.  In 1941 he emigrated to the United States.  He published articles about political and general Jewish and labor Zionist questions in Yidisher kemfer (Jewish fighter).  He was a cofounder and secretary of the Zionist workers’ committee for assistance and construction.  He authored a number of brochures concerning problems with Jewish assistance.  His books include: In di trit fun mayn dor (Footprints of my generation) (New York: Idisher kemfer, 1975), 527 pp.; Maamarim vemasot (Articles and essays) (Tel Aviv, 1980). 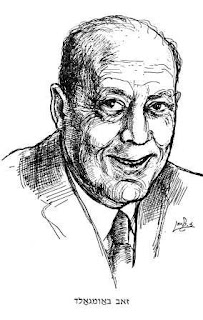