He was a poet and playwright, born in Ponevezh (Panevezys), Lithuania.  In 1928 he graduated from a local Hebrew high school, and he proceeded to study law at Kovno University from which he graduated in 1933.  He worked until the outbreak of WWII for a variety of newspapers. He began writing very young and debuted in print with poems in 1934.  From that year he was working for the daily newspaper Dos vort (The word) in Kovno, and over the years 1936-1940 he was an internal contributor to the Kovno daily Di yidishe shtime (The Jewish voice); under the Soviets, he was transferred to Folksblat (Daily newspaper) and later to Der emes (The truth).  In June 1941, his poetry collection Baginen (At dawn) was published in Vilna, but this edition of his book fell into Nazi hands. At the start of WWII and the Nazi invasion, he escaped from Kovno on June 22, 1941, into Soviet Russia, where he wandered about its cities (Saratov, Novosibirsk, Moscow, and Alma-Ata (Kazakhstan) where he settled for a time. At the end of 1944, he returned to Lithuania. From 1945 until the end of 1948, he served as the Vilna correspondent for Eynikeyt (Unity) in Moscow.  On July 2, 1949, he was accused of “anti-Soviet, nationalist-Zionist activities” and sentenced to ten years of internal exile.  After being freed from a forced labor camp in June 1956, seven years later, he settled in Vilna and engaged in creative literary work.  Until he made aliya to Israel on November 18, 1971, he published his poetry in Sovetish heymland (Soviet homeland) and served as a member of the editorial collective of that serial publication. In Israel, he continued his intensive creative activity, published a number of new books, and he was awarded several literary prizes: ones named for Yankev Fikhman in 1972, Yankev Glatshteyn in 1974, Itsik Manger in 1977, and Prime Minister Shimon Peres in 1983.

In Israel, his work appeared in such journals as Goldene keyt (Golden chain), Bay zikh (On one’s own), Letste nayes (Latest news), and Yisroel shtime (Voice of Israel); also Tsukunft (Future) in New York; and elsewhere.  His cycle of twenty-two poems, entitled Azoy iz gegangen der mentsh (So went the man), which highlights the milestones in the history of mankind, occupies a special place in Osherovitsh’s work.  Eleven of these are on biblical themes: Molokh, Tower of Babel, After the Binding of Isaac, Jephthah, Saul, and the like.

In the considerations of the jury for the Manger Prize, it was noted inter alia: “In his writings Hirsh Osherovitsh illuminates as an observer and overseer of life’s phenomena fully formed and fully colored.  The secret and the basis of his poetic way are to search for an ethical betterment for the suffering of people in a world of sacrifices.”  Y. Shternberg: “Thought dominates his lyrical poetry….  The thinking person, when left alone, occupies the seat of honor in his lyric.”  In Osherovitsh’s “writings, the intellectual and the lyrical are so interwoven…,” wrote Y. Yanasovitsh, “that we do not know what influences us first—the sound or the image, the song or the thought.” 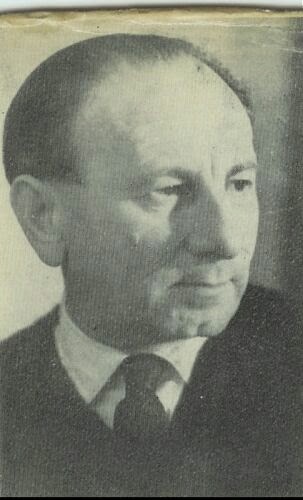