LEYB ROKHMAN (January 2, 1918-September 14, 1978)
The author of stories, he was born in Minsk-Mazovyetsk (Minsk-Mazowiecki).  He studied with a number of itinerant teachers, one of them a Porisover Hassid who exercised a major influence on him.  At age twelve he left by himself for Warsaw and studied there at “Amude hatora” (Pillars of Torah), an elite yeshiva that included secular subjects.  He soon became an intimate of the Porisover Rebbe, in Warsaw and in Otwock, and he even lived in the rebbe’s court, from which he was expelled several years later.  In late 1936 he became a contributor to Varshever radyo (Warsaw radio).  During WWII he was confined in the Minsk-Mazowiecki ghetto; in August 1942 he was deported to a labor camp, and he escaped from there with his wife, brother-in-law, mother-in-law, and two other Jews; for two years they were hidden by a Polish woman in a nearby village.  After liberation, he was in Majdanek where he saw the gas chambers and crematoria.  He later left for Lublin and later still for Lodz, where he wrote for Dos naye lebn (The new life).  From late 1945 until 1948 he recuperated in Switzerland.  In 1950 he settled in Jerusalem.  He wrote Yiddish radio broadcasts for Israeli Broadcasting and for several years for Forverts (Forward) in New York.  Rokhman’s own life was the touchstone of his creative work.  In all of his work, he sought to solve his biographical destiny: born to his seventy-year-old father Shimen to be his heir; to grasp the full Hassidic as well as secular Jewish radiance of Polish Jewry; and to have survived the greatest Jewish destruction and ultimately to build a new Jewish generation in the state of Israel.  His first work, Un in dayn blut zolstu lebn (And in your blood you shall live), was written as a diary—with dates, precise places, and true names, but “this is not a chronicle,” noted Shmuel Niger, “not a collection of ‘episodes’….  This is,…if you will, a novel.”  In his second book, Mit blinde trit iber der erd (With blind steps over the ground), every individual act is accompanied by the narrator’s psychological and historiosophical commentary, and thus is depicted the rupture in the life of the Holocaust survivor.  For that reason, Rokhman created a new storytelling style and an innovative construction.  Yeshurun Keshet wrote: “I come across chapters…in which it appears that the description itself of the Holocaust is not the main thing, but the impact of the events on the author…and his spiritual response are the main thing.”  It is similar in his other work.  His work appeared in: Mordekhai Ḥalamish, Mikan umikarov, antologya shel sipure yidish beerets yisrael (From near and from far away, anthology of stories in Yiddish in Israel) (Merḥavya, 1966); Arie Shamri, Vortslen (Roots) (Tel Aviv, 1966); and Shmuel Rozhanksi and Avrom Zak, Oysgevortslte un ayngevortslte, antologye (Uprooted and rooted, anthology) (Buenos Aires, 1971).  In 1975 he received the Prime Minister’s Prize for writings in Yiddish.
His works include: Un in dayn blut zolstu lebn (tog-bukh, 1943-1944) (And in your blood you shall live, diary, 1943-1944) (Paris: Friends of Minsk-Mazowiecki, 1949), 383 pp. (published serially in Tog [Day] in New York and in Idishe tsaytung [Jewish newspaper] in Buenos Aires), abridged form (Tel Aviv, 1961), 225 pp.; Mit blinde trit iber der erd (Tel Aviv: Hamenorah, 1968), 588 pp.; Der mabl, dertseylungen (The deluge, stories) (Jerusalem, 1978), 199 pp.; a volume in Hebrew of conversations with Rokhman, edited by Amikhal Yevin, Darkhe eropa avelot, siḥot vehirhurim im leyb rokhman al hashoa (The ways of Europe are mourning, conversations and discussion with Leyb Rokhman about the Holocaust) (Jerusalem: Shikmona, 1976), 39 pp.  Translations of his work include: Bedamayikh ḥayi (In my blood I live), trans. Ḥanokh Kalai (Jerusalem: Yesodot, 1961), 451 pp.; Bitseadim sumim al pene haadama (With blind steps on the ground), trans. Ed Shapir (Tel Aviv: Am oved, 1976), 414 pp.; “Babayit/At Home,” fragments from Blinde trit, in Orot (Lights) 12 (Tel Aviv).  He published stories in: Yung yisroel (Young Israel), Di goldene keyt (The golden chain), Yerusholaimer almanakh (Jerusalem almanac), Measef yerushalayim (Literary organ of Jerusalem), Molad (Birth), Davar (Word), and Hatsofe (The spectator); his memoirs appeared in Seyfer minsk-mazovyetsk, yizkor-bukh nokh der khorev-gevorener kehile minsk-mazovyetsk (Volume for Minsk-Mazowiecki, remembrance volume following the destroyed-former Jewish community of Minsk-Mazowiecki) (Jerusalem, 1977).  Chapters of his novel on prewar Hassidic life, which was to form a trilogy with the aforementioned two novels, were published in the anthology Tsuzamen (Together) (Tel Aviv, 1974) and in Yerusholaimer almanakh 2, 2-3, 6-7.  He died in Jerusalem. 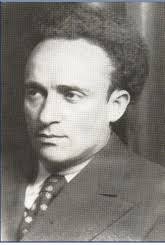