ARN RAPOPORT (AARON RAPPAPORT) (February 9, 1895-September 1, 1964)
A poet and author of stories, he was born near Minsk.  He studied Jewish subject matter with itinerant schoolteachers and Russian with tutors.  In 1911 he made his way to the United States, studied in an English-language school, and he also trained to be a mechanic.  He built a number of his own patented, mechanical inventions.  He fought in battles of WWI as a soldier in the American army.  He began publishing his first poems in 1916 in Forverts (Forward), and from that point on he published poetry and stories in: Avrom Reyzen’s monthly Nay-yidish (New Yiddish) of which he was one of the founders, Di feder (The pen), Getseltn (Tents), Oyfkum (Arise), Tsukunft (Future), Frayhayt (Freedom), Hamer (Hammer), Signal (Signal), Ikuf (IKUF [Jewish Cultural Association]), and Di vokh (The week), among other serials.  In book form: Durkh fayervent (Through firewalls) (New York: Nay-yidish, 1925), 93 pp.; Mayse-shap (Story workshop) (New York, 1935), 159 pp.; Dvoyre di nevie un barak ben avinoym (Deborah the prophetess and Barak son of Avinoam), a dramatic poem (Tel Aviv: Perets Publ., 1965), 142 pp.  In a string of journals, he published several series of poems: “Mashinen” (Machines), “Fabrikn” (Factories), and a long poem entitled Sheydim (Devils), among others.  He left behind in manuscript, among other items, a dramatic poem, “Mayster thomas” (Master Thomas), and the plays: Gilgl mentsh (Metamorphosis of man), Shuldik (Guilty), and A kholem in roym (A dream in Rome).  Rapoport was a poet and depicter of workers’ lives and the sweatshop, of the big city, and of war.  Of his war poetry, Shmuel Niger wrote that in them “there is that simplicity and that quiet pain which fills the air of truly great suffering.”  In his sweatshop poetry, he was different from others who wrote on this topic, in the words of Ben-Tsien Goldberg, due to “his attempts to penetrate within people…not so much in the economic or political circumstances.”  He died in New York. 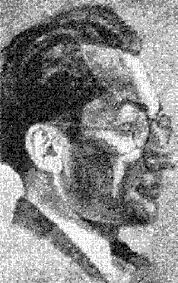