DOVID ROM (DAVID ROME) (August 10, 1910-January 16, 1996)
He was born in Vilna, and from 1921 he was living in Canada.  He studied literature and philosophy in Vancouver, later in Seattle in the United States.  From 1938 he was living in Montreal where for eighteen years he served as director of the “Jewish Public Library” (1953-1971), and he put together the Bronfman Collection of Canadiana—the largest collection on Jews in Canada.  From 1964 he was professor of Judaica at McGill University and from 1971 professor of religious studies at the Université de Montréal.  His literary and bibliographic work began in Der idisher mayrev-byuletin (The Western Jewish bulletin) in Vancouver (1934-1936).  He contributed articles to: Der idisher zhurnal (The Jewish journal) in Toronto, Dos idishe vort (The Jewish word) in Winnipeg, and Keneder odler (Canadian eagle) in Montreal, and Forverts (Forward) and Der amerikaner (The American) in New York, among other serials.  He edited: the anthology Lekoved yisroel rabinovitsh (In honor of Yisroel Rabinovitsh) (Montreal, 1954); with Yankev Grosman, Dos biblyotek-bukh (The library book) (Montreal, 1957), 166 pp. (Yiddish) and 114 pp. (English); Dos yoyvl-bukh tsum 200 yerikn yoyvl fun yidishn yishev in kanade (The jubilee volume for the 200th anniversary of the Jewish community in Canada) (Montreal, 1959); Dos yoyvl-bukh fun der yidisher biblyotek, 1914-1964 (The jubilee volume for the Jewish library, 1914-1964) (Montreal, 1964), 87 pp. (Yiddish) and 12 pp. (English).  In the last of these he published a long bibliographic piece on Yiddish books in Canada.  He wrote about Yiddish literature and Jewish history for Anglophone Jewish periodicals in Montreal and brought out several volumes in English on the same topic, among them: The First Two Hundred Years (Montreal, 1962); and Jewish Canadian Literature (1962).  From 1974 he served as editor of the periodical, Canadian Jewish Archives in Montreal.  He died in Montreal. 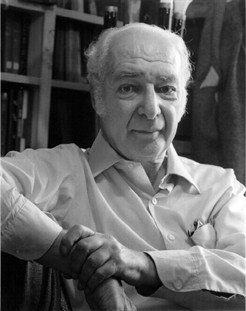