AVROM-SHIYE HESHEL (ABRAHAM JOSHUA HESCHEL) (January 11, 1907-December 25, 1972)
He was born in Warsaw, Poland.  His father, R. Moyshe-Mortkhe Heshel (Moshe Mordechai Heschel), was the rabbi of Pelzovizna.  He studied in yeshivas and in the University of Berlin.  In 1933 he received his doctoral degree from the “Hochschule für die Wissenschaft des Judentums” (Higher Institute for Jewish Studies) in Berlin, and for a time he lectured there in the field of Talmudic studies.  Over the year 1937-1938, he served as a substitute for Dr. Martin Buber at the Institute for Jewish Education for Adults in Frankfurt.  Over the year 1938-1939, he was a lecturer in philosophy at Institute for Jewish Studies (Instytut Nauk Judaistycznych) in Warsaw.  In 1939-1940 he was the founder and lecturer at the Institute for Jewish Studies in London.  From March 1940 Heschel was living in the United States where for the first time he was a professor of Jewish philosophy at Hebrew Union College in Cincinnati, and from 1945 he was professor of Jewish ethics and Kabbala at the Jewish Theological Seminary in New York.  He was a member of the scholarship board of YIVO and chairman of the committee for research on Hassidism.  Heschel was also active in OZE (Obschestvo zdravookhraneniia evreev—Society for the Protection of the Health of the Jewish Population), of the American Society for Jewish Research, and of the Jewish Publication Society in Philadelphia, among other such groups.
Heschel debuted in print with Torah novellae in the collection Shaare-tora (Gates of the Torah) (Warsaw, 1921), and in Yiddish with the story “Der tsadek fun freyd” (The holy man from joy) in Ilustrirte vokh (Illustrated week) (Warsaw, 1924); and from that point on, he published poems, stories, articles, monographs, philosophical studies about Hassidism, ethics, Kabbala, Jewish history, and other topics in: Ilustrirte vokh, Haynt (Today), Baderekh (On the road), and Literarishe bleter (Literary leaves)—in Warsaw; Berliner bleter (Berlin leaves), 1929-1930, in Berlin; Tsukunft (Future), Tog (Day), Idisher kemfer (Jewish fighter), Yivo-bleter (Pages from YIVO), Hadoar (The mail), Sefer hashana leyehude amerika (Annual for the Jews of America), Bitsaron (Fortress), Sefer hayovel likhvod levi ginzburg (Jubilee volume in honor of Levi Ginzburg), Sefer hayovel likhvod profesor d״r moshe shor (Jubilee volume in honor of Prof. Dr. Mojżesz Schorr), Sefer hayovel likhvod aleksander marks (Jubilee volume in honor of Alexander Marx), and others—in New York; and Megilot (Scrolls) in Jerusalem.  He also published in the German serial Gemeindeblatt der jüdischen Gemeinde zu Berlin (Community newspaper for the Jewish community of Berlin) (Berlin, 1936-1937) a series of treatises under the title “Persönlichkeiten der jüdischen Geschichte” (Personalities of Jewish history), concerning the era of the Tannaim.  He was the author of a great number of works concerning Jewish philosophy and Hassidism in Yiddish, Hebrew, English, German, and Polish, such as: in Yiddish, Der shem hameforah, mentsh (Man: God’s Ineffable Name) (Warsaw, 1939), 110 pp., which includes poems from a Jewish mystical world conception that was simultaneously deeply human; Der mizrekh-eropeisher yid (The Eastern European Jew) (New York, 1946), 45 pp., a portion of his work on the Eastern European era in Jewish history; “R. pinkhes koritser” (Rabbi Pinḥas of Korets), Yivo-bleter 33 (1949), pp. 9-48, with a summary in English; Kotsk, in gerangl far emesdikeyt (Kotsk, in a struggle for truthfulness) (Tel Aviv: Hamenorah, 1973), 2 vols.; in Hebrew, Yirat shamaim (Fear of heaven) (New York, 1942), 14 pp.; Pikuaḥ neshoma (The save a soul) (New York, 1949), 14 pp.; R. gershon kitover (Rabbi Gershon of Kuty) (Cincinnati, 1950), 71 pp.; A Concise Dictionary of Hebrew Philosophical Terms (Cincinnati, 1941), 168 pp.; in German, Der Rambam (The Rambam [Moses Maimonides]) (Berlin, 1935), French translation (1936), Yiddish translation published serially in Tog (1942); Die Prophetie (The prophets) (Cracow, 1936), 194 pp.; Don Jizchak Abravanel (Berlin, 1937), 29 pp., Polish translation as Don Yicchak Abravanel (Warsaw, 1938).  He was also the author of a series of monographs, including: in German, “Das Wesen der Dinge nach der lehre Gabirols” (The essence of things after the teachings of [Ibn] Gabirol) (1939); in English, “The Quest for Certainty in Saadia’s Philosophy” (New York, 1944); Polish Jews: A Pictorial Record (New York, 1947); “R. Pinḥas of Korets” (1949); The Earth Is the Lord’s: The Inner World of the Jew in East Europe (New York, 1950), 109 pp.; Man Is Not Alone: A Philosophy of Religion (New York, 1951), 305 pp.; The Sabbath: Its Meaning for Modern Man (New York, 1951), 118 pp.; Man’s Quest for God: Studies in Prayer and Symbolism (New York, 1954), 151 pp.; God in Search of Man: A Philosophy of Judaism (New York, 1955), 437 pp.; I Asked for Wonder: A Spiritual Anthology, ed. Samuel H. Dresner (New York, 1984); The Circle of the Baal Shem Tov: Studies on Hasidism (Chicago, 1985), 213 pp.  He was also the editor of Berliner bleter far dikhtung, kunst un visnshaft (Berlin pages of poetry, art, and scholarship) in Berlin (1929-1930).  In 1959 an English-language anthology was published in New York, containing Heschel’s writings on Jewishness, entitled Between God and Man: An Interpretation of Judaism from the Writings of Abraham J. Heschel (279 pp.).  He also published under the name “Itsik.”  He died in New York.
“Heschel writes his philosophical works expressively and often lyrically,” wrote Shmuel Niger.  “Heschel accentuates in his works the great meaning of religion which he elevates to the highest human and divine philosophy, for him ‘the ever vigilant consciousness’ and also an enhanced sense of beauty.  He has stressed in his more recent work the moods and feelings of a Jewish person at the time of and after the Holocaust in Europe, searching for a synthesis of God, man, and the world.” 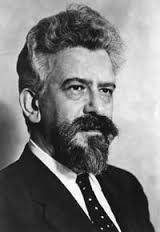 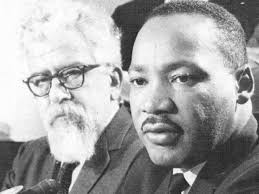