SIMKHE-YANKEV SIMKHOVITSH (SYMCHOWICZ, SAM SIMCHOVITCH) (January 21, 1921-July 12, 2017)
He was born in Sobin (Sobienie Jeziory), near Otwock, Poland, to a father who was a bootmaker and later a beer tavern-keeper.  In his early youth he moved with his parents to Otwock, close to Warsaw.  He studied in religious primary school and in a public elementary school.  After finishing school, he went to work as a bootmaker, was active in circles of laboring youth in Otwock, and organized and ran a local Bundist youth group “Tsukunft” (Future) and SKIF (Sotsyalistishe kinder farband, or Socialist children’s union) organization until the outbreak of WWII in 1939.  Under the influence of a religion teacher in his Polish school, who, despite being forbidden from using Yiddish, read before the pupils selections from Yiddish literature, Simkhovitsh began to write in Yiddish.  He composed poetry, stories, and a long autobiography which he sent into a competition of young biographers at YIVO in Vilna in 1939.  With the outbreak of war that year, he fled on foot from Otwock to Lutsk, Volhynia, and he remained there until the arrival of the Red Army.  In January 1942 he made his way to Spassk, Ryazan district, Russia, and he worked there as a stitcher and shoemaker in a leather factory, while in the evenings he attended a Russian middle school.  That year he left Spassk, entered the pedagogical institute in Ryazan, and then later moved on to Alma-Ata and Tashkent.  In 1943 he settled down in the village of Oktyabrsk, Kirgizia, where he worked and married.  In 1946 he returned with his wife and daughter to Poland.  He settled in Wrocław, Lower Silesia, where he was active in the local cultural and art association, while studying at Wrocław University.  In 1948 he immigrated to Paris and in 1949 came to Montreal, Canada, where he worked for two years in a leather shop and pursued his studies in the Jewish teachers’ seminary from which he graduated in 1954.  He went on to work in the Jewish Public Library in Montreal and as a teacher in the Perets schools.  His writing activities began with a poem entitled “Ikh gleyb” (I believe) in Dos naye lebn (The new life) in Lodz (no. 34, 1946).  He later wrote poetry, articles, and stories for: Dos naye lebn and Yugnt-veker (Youth alarm) in Lodz; Folkstsaytung (People’s newspaper) in Warsaw; Unzer shtime (Our voice) in Paris; Foroys (Onward) in Mexico City; Loshn un lebn (Language and life) in London; Der shpigl (The mirror) in Buenos Aires; Keneder odler (Canadian eagle) in Montreal; Fraye arbeter-shtime (Free voice of labor), Nyu yorker vokhnblat (New York weekly newspaper), Afn shvel (At the threshold), Unzer tsayt (Our time), Vayter (Further), and Kinder-zhrnal (Children’s magazine) in New York; Kalifornyer lebn (California life) in Los Angeles; and Letste nayes (Latest news) in Tel Aviv.  In book form, he published: Azoy iz a yugnt fargangen (So a youngster dies), poetry (Montreal: Committee of writers, 1950), 79 pp.; In sho fun tfile (In the hour of prayer) (Montreal, 1958), 76 pp.; and many others.[1]  In 1955 he moved to Ottawa, Canada, where he worked as a teacher in the local Talmud-Torah.  He died in Toronto. 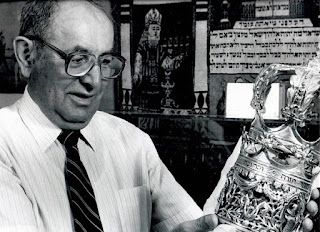 [1] Translator’s note.  Simkhovitsh lived more than half a century after this entry was first published and died at the age of ninety-six.  He published an additional dozen or more books of poetry. (JAF)