SHEYNE-ROKHL SIMKOF- (SEMKOFF-) BADER) (b. September 18, 1899)
She was born in Maytshit (Mołczadź), Grodno district, Russian Poland.  Her father was a schoolteacher in the local community, and her mother ran a religious elementary school for young children in the town.  Until age nine she studied with her mother, later after her mother’s death she studied with a female tailor and until age sixteen was raised by relatives.  In 1915 she immigrated with her brother and sister to the United States.  She worked in a sweatshop during the daytime and continued her studies in school at night.  She wrote short poems and stories in her early youth, but she only began publishing them in 1925, in Fraye arbeter-shtime (Free voice of labor) in New York.  In the meantime, she published a series of plays which were, from 1916, produced on the Yiddish stage in various countries.  Throughout the years she contributed poems, children’s tales, stories, and impressions, from the old country as well as from Jewish life in America, in: Fraye arbeter-shtime, Yidishes tageblat (Jewish daily newspaper), Der tog (The day), Morgn-zhurnal (Morning journal), Forverts (Forward), Di tsukunft (The future), Der amerikaner (The American), Kinder-tsaytung (Children’s newspaper), Kinder-zhurnal (Children’s magazine), and Nyu yorker vokhnblat (New York weekly newspaper), among others, in New York; Di idishe velt (The Jewish world) in Philadelphia; Der yidisher kuryer (The Jewish courier) in Chicago; Keneder odler (Canadian eagle) in Montreal; Der idisher zhurnal (The Jewish journal) in Toronto; and in the Yiddish newspapers of South America.  He books include: In gerangl fun’m lebn, dertseylungen un noveletn (In the struggle of life, stories and novellas), 2 vols., with a preface by Gershom Bader, vol. 1 (New York: Shoulson Press, 1949), 253 pp., vol. 2 (New York: Shoulson Press, 1949), 287 pp., with appreciations from Shmuel Niger, Zalmen Shneur, M. Vityes, A. L. Baron, E. Almi, and Avrom Reyzen.  Of her twenty-five plays, the following were performed in Yiddish theaters: Karbones fun libe (Victims of love) (1916); A nomen nokh der mamen (Named after her mother) (1918); Efn di oygn (Open your eyes) (1920); Far der khupe (Before the wedding canopy) (1924); Soydes fun yedn hoyz (Secrets in every house) (1926); Far tate-mames zind (For the parents’ sin) (1927); Meydl fun mayn harts (Girl in my heart) (1930); Farvos meydlekh antloyfn (Why girls run away), produced in 1932 by Ludwig Satz; Helo, mali (Hello, Molly), staged by Molly Picon in Argentina in 1932; Der mazldiker almen (The lucky widower) (1964, performed on the stage in the state of Israel), among others.  She also prepared for publication two volumes of prose, entitled Mayn lebn in teater (My life in theater).  Until 1930 she was working in a clothing shop, and later she earned a living from her staged plays.  She was last living in New York.  She was the wife of Gershom Bader.  As Shmuel Niger wrote: “Her images of childhood over there were imbued with both idyll and drama.”  And, Avrom Reyzen noted: “Always accompanying her was the impoverished old country, which she painted faithfully and honestly.” 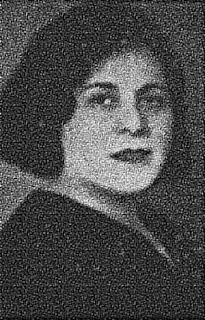