LOUIS (SIMKHE-LEYB) SIGAL (SEGAL) (July 1895-June 16, 1964)
He was born in Lovitsh (Łowicz), Poland, the son of Benyomen Zaklikovski.  His father was strictly Orthodox, the descendant of rabbis, though at times he secretly wrote Hebrew verse.  Louis studied in religious elementary school, yeshiva, and later in a senior high school.  Shortly after his father’s death, at nine years of age, he helped his mother in her coal business.  He later learned to make socks and left home to work in a sock factory, where only children were working, and there he experienced his first strike; at age twelve, he was one of three who were selected to negotiate with the owners.  In 1906 he joined the Labor Zionist movement and on several occasions was sent by his town to the Labor Zionists in Lodz.  He helped with the establishment of first library in his town.  In 1909 he made his way with a group of young men from Łowicz to Warsaw to meet Mendele Moykher-Sforim who was then making his triumphal voyage through the major cities of the Jewish Pale.  In 1911 he departed for the United States, crossed the [Polish-German] border, but he was seized there and arrested.  With great difficulty he was released from jail and came to Bremen.  On board ship he helped organize a strike of the passengers in third and fourth class for better food and better treatment.  On June 23, 1911, he arrived in Galveston, Texas, and proceeded from there to St. Paul, Minnesota.  The first months he performed hard, physical labor, and later he went on to work in a hat factory and began earning three dollars each week.  In St. Paul he took an active part in the “Sholem-Aleykhem” branch (no. 16) of the Jewish National Workers’ Alliance.  He organized the local furrier workers and later led a strike for them (as chairman of the strike committee).  At the convention of the “Cap Millinery Union” in New York in 1918, he was elected a member of the General Board and was entrusted with the position of renewing contracts with the owners of a significant part of the industry throughout the country.  In 1920 he helped form a “Gold-fakh” (?) union which was the first effort to unite all such unions in America.  In 1922 he became assistant general-secretary of the Jewish National Labor Alliance, and in 1926 he became a member of the American section of the Zionist world executive, of the Zionist action committee, of the executive of the Jewish World Congress, of the Board of Governors of Israel Bonds, the Jewish National Fund, and the World Jewish Culture Congress, as well as other organizations.  In 1945 the Alliance published a jubilee volume with greetings in honor of Segal’s fiftieth birthday.  A second jubilee volume with greetings and longer appreciations from prominent party leaders and writers on his twenty-fifth anniversary of work as a general-secretary was published in 1951.  From the 1930s he was writing articles on labor issues, on Zionism, on general politics, and on Jewish culture, among other topics.  He published his articles in the Yiddish and the Anglophone Jewish press in America, Israel, and other countries.  In book form: Bay unzere sheyres hapleyte in poyln un mayrev-eyrope (With our survivors in Poland and Western Europe) (New York, 1946), 40 pp.  His articles, together with this pamphlet, appeared in the aforementioned 1951 jubilee volume.  They were compiled in three sections: (1) “Yidishe un algemeyne problemen” (Jewish and general issues); (2) “Medines-yisroel in kamf un oyfboy” (The state of Israel in struggle and construction); and (3) “Mit der sheyres hapleyte in eyrope” (With the survivors in Europe).  He died after a serious illness in New York.  In Ashdod, Israel, a home was erected in his name.
As Dr. Sh. Margoshes stated:

Our world conception in strange, new Jewish surroundings requires someone quatralingual, an interpreter, a defender vis-à-vis the majority….  Louis Segal was such a quatralingual man, such an interpreter, such a defender of Eastern European Judaism, of the Eastern European mentality on the American Jewish scene….  He was our agent in the large Jewish organizations, always representing our own Jewish sentiments and defending our own Jewish-Yiddish mentality….  This he did with great aptitude, with great talent, with a wonderful naturalness.  He had the wisdom of the masses, together with the intuition, courtesy, and kindness of a great intellectual.  The voice of generations of Eastern European Jewry, together with the historical experience of the masses of Jewish immigrants in the new world, spoke through him….  He was at home with the Jewish National Labor Alliance; with other Jewish organizations and institutions; he was a partner who would note without great fanfare what was inherent in the simplest Jews, who with their pennies gave away their time and their energies, coming to meetings and demonstrations, driven by the momentum to live with Jewish suffering and with Jewish joy….  His voice was heard, for it rang simply, as simply as that of the common man, but also because his voice reverberated with a strange devotion to the Jewish people that transcended frontiers and was endless.

He was child of American Jewry.  The majority of the years of his life he was active in this country, under the banner…of that authentic, plain Jewry which nevertheless protected itself from assault of the American environment,...of that Jewry which survived, strengthened itself, and sought to perpetuate itself; of that Jewry…that yearned for Zion, for a fully Zionist life,…for a plain Zionism—in harmony with the new American life….  A vehement temperament, alive and awake, always ready to be mobilized to the front, always the flag-bearer who expresses his clear stance and fights for it with acuity and clarity, with fervor and temperament. 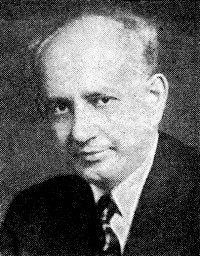