AYDE MAZE (IDA MASSEY) (July 9, 1893-June 13, 1962)
She was born Ayde Zhukovski in the village of Ugli (Ugly), near Kapulye (Kopyl), Minsk district, Byelorussia.  Until age thirteen she attended religious primary school together with her brothers, and in her fourteenth year she moved with her entire family to the United States; she moved the next year to Montreal, Canada.  She began writing poetry in 1926.  She debuted in print in the journal Kanade (Canada), edited by Y. Y. Sigal and A. Sh. Shkolinov, in 1928 with “Lider vegn mayn kind” (Poem about my child)—dirges for a child who had died.  She placed poetry, essays on literature, and the like in newspapers and journals in the United States, Canada, Poland, Argentina, Mexico, and Israel.  She published four volumes: A mame (A mother) (Montreal: Jewish Cultural Association, 1931), 96 pp.; Lider far kinder (Poems for children), with an introduction by L. Malekh (Warsaw: Kh. Bzhoza, 1936), 119 pp.; Naye lider (New poems) (Montreal: Jewish Public Library, 1941), 160 pp.; and Vaksn mayne kinderlekh, muter- un kinder-lider (My children grow up, mother- and children-poetry) (Montreal: Canadian Jewish Congress, 1954), 201 pp.  Together with E. Korman and N. Y. Gotlib, she co-edited Heftn, shrift far literatur, kunst un kultur-inyonim (Notebooks, writings in literature, art, and cultural matters), a quarterly out of Montreal and Detroit (1935-1937).  Maze acted as a mother for a series of Yiddish writers.  She assisted in publishing the poetry of Freydl, Khane Shteynberg, Yudika, Sh. Perl, M. Shafir, Sh. Z. Shneurson, Rokhl Korn, Simkhovitsh, Miranski, and Y. Y. Sigal.  She brought out [works by others]: Dray froyen-poetn fun modernem yapan (The poetesses of modern Japan), translated by Yekhezkel Bronshteyn (Montreal, 1952), 45 pp.; a prose translation [by Arn Zhukhovitski] from Polish by Esther Bas-Meltser; and an album of Jewish art pictures by H. Daniels.  During WWII she contributed to the organizations that aided sufferers on the other side of the ocean and helped liberate people from the camps; she extracted visas for a number of writers who found themselves in Germany, China, and other countries; and she brought them to Canada and helped them get settled.  Maze excelled as a children’s poet.  “In some of her work, she played the role of a child in forgetfulness,” wrote N. Shteynberg, “as if she herself were a child; in other poems she played with the child like a beloved mother and enjoyed it.”  “Ayde Maze especially excelled in the short lyrical poem,” noted Meylekh Ravitsh. 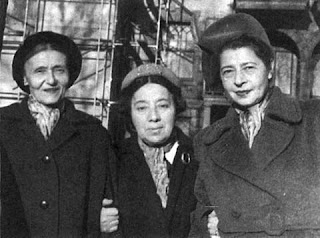