He was a poet, born in Nemirov (Nemyriv), Ukraine. After graduating from the local school, he moved to Kharkov and studied in the Jewish division of the Journalistic Technicum; after subsequently graduating from the Economic Technicum, he went to work as an economist. He was drafted into the military in 1937, where he experienced the path of a soldier through the rank of lieutenant-colonel. In 1938 he took part in the battle at Lake Khasan. Beginning in 1941, he was at the WWII front, and after demobilization he settled in Leningrad, later moving to Novgorod. Over the course of many years, he worked in the bookselling system. He debuted in literature in 1930 in the Kharkov Yiddish newspaper Yung gvardye (Young guard). He was later a regular author for Sovetish heymland (Soviet homeland) in Moscow. The main motifs of his poetry were war-related themes, philosophical thoughts, and love miniatures. He also penned essays for journals as well as for the newspaper Birobidzhaner shtern (Birobidzhan star). 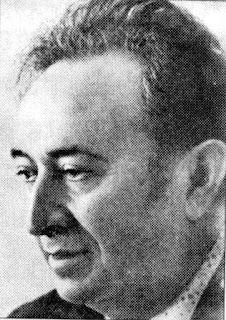