MASHE GRINBOYM (MASHA GREENBAUM) (b. October 3, 1927)
She was born in Kovno.  She studied in the Yavne high school.  She survived the Kovno ghetto, concentration camps in Estonia, and Bergen-Belsen.  In 1946 she emigrated to Mexico.  In 1964 she moved to London and graduated from university there.  From 1978 she was living in Israel.  She wrote frequently for Di shtime (The voice) and Der veg (The way) in Mexico City, Loshn un lebn (Language and life) in London, and Idisher kemfer (Jewish fighter) in New York.  She wrote Una ventana al infierno (A window onto hell) (Mexico City, 1962), 202 pp., a volume of stories from the ghettos and concentration camps in Lithuania, Estonia, and Germany. 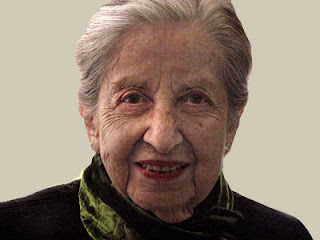