ZIGMUNT (SHLOYME-ZALMEN) TURKOV (TURKOW) (November 6, 1896-January 21, 1970)
He was born in Warsaw.  He attended religious elementary school, later Muravlyov’s commercial school, and from there he switched to Krinski’s commercial high school, and he studied Tanakh and Hebrew in his home with private tutors,.  In his youth he excelled in painting and sculpting, but his main interest at the time was concentrated on theatrical plays which was a Turkov family affair.  He studied in a Polish drama school of the Philharmonia, and from there he switched to the private drama school of Hryniewiecki, from which he graduated in 1916.  For a short time thereafter, he performed with the Teatr Artystyczny and other Polish theaters, but he was at that time drawn to the Yiddish stage.  Already in his high school years, he came into contact with Yiddish literature—initially thanks to Yiddish writers who frequently visited the school, and secondarily thanks to the influence of his friend Shloyme Mendelson who was a student in Krinski’s school at the same time as Turkov.  In 1916 Turkov took part in the amateur performances of Warsaw’s Hazemir (The nightingale) theater, worked for a short time in Dovid Herman’s drama circle, was one of the principal organizers of “Dos artistishe vinkele” (The artistic corner) within Hazemir, and then was engaged by the Kaminski Theater to play the role of Franz Moor in Schiller’s Di royber (The robbers [original: Die Räuber]).  He spent 1917-1918 going through the troupe’s circuit, together with Esther-Rokhl and Ida Kaminski, through Poland, Ukraine, greater Russia, and Byelorussia, and himself staged S. Yushkevitsh’s comedy Sonkins glik (Sonkin’s fortune), which he and Ida Kaminski (by now his wife) had translated together.  For a short time in 1919 he was a director for Boris Glagolin, but he soon returned to the Yiddish stage.  The Kaminski Troupe performed in Vilna in 1920, and from there they moved on to Warsaw where Turkov undertook the direction of the Central Theater, and there between 1921 and 1924 he produced a series of plays which were new to the Yiddish theater, such as: Kise harabones (The rabbinical throne) by Alter Ayzenshlos; Der karger (Le Misanthrope[?]) and Di libe als doktor (L’Amour médecin) by Molière; Di zibn gehangene (The seven who were hanged [original: Rasskaz o semi poveshennykh]) by Leonid Andreyev; Revizor (The inspector general [original: Revizor]) by Nikolai Gogol; Serkele (Serkele) by Dr. Shloyme Ettinger; Der priziv (The conscript) by Mendele Moykher-Sforim; Shapse tsvi (Shabbatai Tsvi) by Y. Zhulavski; Di tsvey kuni lemels (The two Kuni Lemels) by Avrom Goldfaden (in Turkov’s own adaptation), staged in Kaminski’s theater; Dos tsente gebot (The tenth commandment) by Goldfaden (in Turkov’s new adaptation); Velf (Wolves [original: Les Loups]) by Romain Rolland; In goldn land (In the golden land) by Yankev Pat; Der oytser (The treasure) by Dovid Pinski; and other translations and adapations from works by Sholem-Aleykhem, Victor Hugo, Fyodor Dostoevsky, and others.  Between 1929 and 1939, he performed in a variety of cities and countries in Europe and the United States.  He also performed in a number of movies.  He continued playing in Warsaw until the city was bombed by the Germans in September 1939.  In May 1940 he succeeded in escaping from Poland to Italy, and from there to Portugal from whence his younger brother Mark Turkov enabled him to make his way to Argentina and from there to Brazil.  There he led a drama club associated with the Sholem-Aleykhem Library in Rio de Janeiro, and later he was one of the directors of the local Portuguese theater—the Portuguese-language playwright Pedro Bloch, a Jew, wrote in Portuguese a play about Turkov entitled Esta noite choveu prata (Tonight it rained silver) which premiered at the Portuguese literary academy.  After WWII Turkov visited Israel and then went on to Poland where he directed Sholem-Aleykhem’s Blondzhende shtern (Wandering stars) in the Yiddish State Theater, and then returned to the state of Israel, settled in Tel Aviv, performed in Yiddish theater there, and produced Blondzhende shtern in a Hebrew chamber theater.  He proceeded to establish his own theater Zuta, in which he staged his own play Oskar and performed in Hebrew.
Turkov began writing with translations of excerpts from dramatical works from literature at large, later (on his own and with Ida Kaminska) making translations from Russian, Polish, and German of a variety of plays, serving as editor of Yidish teater (Yiddish theater), organ of the Jewish Artists’ Union in Warsaw, and publishing semi-fictional descriptions in Di literarishe bleter (The literary leaves) in Warsaw (“Emeritn” [Retirees], 1929) and in Yiddish newspapers in South America.  He was the author of theater pieces—the one-act plays: Af der elter (In old age) and the aforementioned Oskar, among others—and later composed a series of works of a longer and more significant format.  The latter include: Shmuesn vegn teater, geshikhtlekher iberblik, gedanken un derfarungen (Talks about theater, historical overview, thoughts, and experiences) (Buenos Aires: Unzer bukh, 1950), 212 pp., a useful volume which can be read with considerable interest; Fragmentn fun mayn lebn (Fragments from my life), memoirs (Buenos Aires: Central Publisher of Polish Jews in Argentina, 1951), 297 pp., full of interesting, here and there even exciting depictions of the author’s colorful childhood and youth, until he was established on his own feet; Teater-zikhroynes fun a shturmisher tsayt (Theater memoirs from a tempestuous time) (Buenos Aires: Central Publisher of Polish Jews in Argentina, 1956), 347 pp., a sequel to Fragmentn fun mayn lebn, comprised of the author’s memories of the theater from 1916 until 1920 when he returned from Russia to Vilna and Warsaw; and Di ibergerisene tekufe, fragmentn fun mayn lebn (The interrupted era, fragments from my life) (Buenos Aires: Central Publisher of Polish Jews in Argentina, 1961), 466 pp., a further sequel.  He died in Tel Aviv. 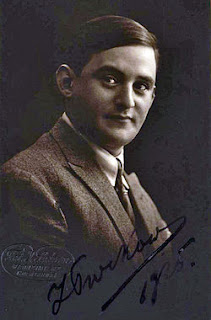