He was a poet, born in Minsk, Byelorussia, into the family of an office employee. Following the Bolshevik Revolution, he became a laborer in a wallpaper factory. He studied in his free time at an evening school for working youth, and he later graduated from the Yiddish division of the Literature Department of the Moscow Pedagogical Institute. He was active in Komyug ([Jewish] Communist youth association) and began writing poetry in 1920, some of which was included in his book Lider un poemen (Poetry). In 1924 he was one of the founders of the young writers’ group associated with the journal Der yunger arbeter (The young worker). He soon became distinctive for his lyrical and romantic style. His lyrical hero belonged to those youths who “went off to death” for the Revolution. At first, these motifs sounded exalted and inspiring, but the more the poet met with harsh reality, the more his work was permeated by the dramatic and tragic. The dreamlike quality—with which his prewar poetry was tinged—of his ballads and poems (for example, the poems “Vialontshel” [Cello] and “A romantishe nakht” [A romantic night]) cede later in his poetry a place for deep dramatic and tragic inflection. Such was the case with: “Kikhelekh un zemelekh” (Cookies and rolls), “Zeks milyon” (Seven million), and “Ane frank” (Anne Frank), among others. Also, ethnic motifs began to prevail in his poems after the Holocaust. A growing interest in the old treasures and the universal cultural values of the Jewish people, and in the Bible, brought him to the magnificent poetic translation of “The Song of Songs.” During WWII, in which he took part as an artilleryman at the front lines, he experienced the tragedy personally—his wife and child died in the Minsk ghetto.

On two occasions the poet tasted the bitterness of languishing in Stalinist prisons and camps. He was first arrested in 1937, and shortly after being released in 1941, he was sent to the front. The second time he was purged in 1948, at the time of the Soviet regime’s attack on all of Yiddish culture. He emerged alive and was rehabilitated after Stalin’s death. Writing under the pen name of M. Sibirski, he left behind a remarkable poetry cycle about this era, a portion of which was published in Yerusholaimer almanakh (Jerusalem almanac) in 1992. With the founding of Sovetish heymland (Soviet homeland), Teyf served as a member of the editorial board and ran the poetry division. After his death, the journal published his poetic work “A nit-farendikte dertseylung” (An unending story) in 1984. His writings have been translated into Russian, Byelorussian, Hebrew, and other languages. The composer Maksim Dunayevski composed music in 1970 to the Russian translation, by Yuna Morits, of his poem “Kikhelekh un zemelekh.” He was living in Moscow until his death. 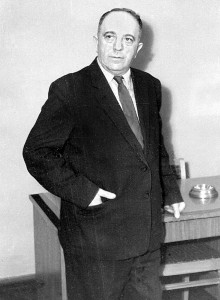