MEYER TOYBENHOYZ (MEIR TAUBENHAUS) (March 27, 1865-October 27, 1937)
He was born in Jerusalem, father of the writer Efrayim Toybenhoyz (Ephraim Taubenhaus).  He studied in the yeshiva Ets Ḥayim (Tree of life) in Jerusalem.  He lived in Tsfat (Safed), striving to make the local Jews productive, and to that end he created a weaving workshop.  He visited Russia and Poland and gave talks about Ḥibat-Tsiyon (Love of Zion). In Yiddish he published articles and correspondence pieces from Israel in: Di yudishe gazeten (The Jewish gazette) and Yidishes tageblat (Jewish daily newspaper) in New York; Haynt (Today) in Warsaw; and the Yiddish supplement to Jewish Chronicle in London (1906-1907).  Chapters of his Sefer hazikaron (The book of memory) were published in: Loshn un lebn (Language and life) in London; Der amerikaner (The American), Nyu-yorker vokhnblat (New York weekly newspaper), and Dos yudishe folk (The Jewish people)—in New York; Di idishe velt (The Jewish world) in Philadelphia; Der shpigl (The mirror) in Buenos Aires; Moment (Moment) in Montevideo; Keneder odler (Canadian eagle) in Montreal; and others.  In Hebrew, he wrote for: Hamelits (The advocate), Hatsfira (The siren), Hamagid (The preacher), Hatsvi (The gazelle), Hashkafa (Overview), Haor (The light), Ḥavatselet (Daffodil), and Hayom (Today), among others.  He was a vegetarian and translated K. Koyfman’s Gezunt un lebn (Health and life) into Hebrew, as well as a book by Herling on the same topic.  He was also deeply engaged with Jewish folklore and published works on this topic in various periodicals.  He died in Israel.  His life, as well as his literary and community activities, are discussed in detail in the memoir volume, Benetiv hayaḥid, ḥaye ḥolem veloḥem beir hamekubalim (One man’s path, dreamer and fighter in a city of Kabbalists) (Haifa, 1959), 405 pp., by his son.  This work includes a bibliography of his writings as well. 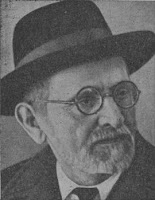