SHMARYAHU LEVIN (1867-June 9, 1935)
He was born in Svisloch (Svislovits), Byelorussia.  He attended religious elementary school and yeshiva.  He later turned his attention to secular subject matter, graduating from a senior high school in Minsk and going on to study at the Universities of Königsberg and Berlin and receiving his doctor of philosophy degree.  He joined the Ḥoveve-tsiyon (Lovers of Zion) movement in Minsk, while he was a student there, and he was later influenced by Aḥad Haam’s idea of a “Merkaz ruḥani” (Spiritual center) in the land of Israel.  In his student years in Berlin, he founded (together with Leo Motzkin) the union of Jewish students in Russia.  After completing his university studies, he lived for several years in Warsaw, where he worked for Aḥiasef publishing house and compiled on commission for the press an anthology of Hebrew poetry entitled Shirat yisrael, mivḥar hashira haivrit mikadmuta vead haet haaḥarona (Poetry of Israel, a selection of Hebrew poems from the beginning to the latest era) (Warsaw, 1896), 96 pp.  Over the years 1896-1898, he served as crown rabbi in Grodno and Ekaterinoslav.  In 1904 the Reform synagogue of the followers of the Jewish Enlightenment in Vilna—Taharat Hakodesh—accepted him as rabbi and preacher.  Levin was a brilliant speaker, and his sermons always attracted a large crowd, quickly making him well-known and beloved in Vilna Zionist-inclined circles.  In 1906 he was elected on the national list as a deputy from Vilna to the first State Duma.  Afterward, as the Tsarist reaction dispersed the Duma, Levin was among the deputies who signed the historic Viborg appeal.  The Black Hundreds, who at that time murdered the Jewish deputy cadets, Grigori Iollos and Mikhail Herzenstein, had him on their list, but he saw that the time was right to make his escape to Berlin.  He began writing in Hebrew during his period in Warsaw.  He published his first journalistic articles in Hamagid (The preacher).  Over the years 1900-1902, he wrote for Hashiloaḥ (The shiloah) a monthly survey of Jewish life around the world.  In 1903 he published articles in Fraynd (Friend) in St. Petersburg, and he later contributed work to Di naye velt (The new world) and after the 1905 Revolution to the weekly newspaper Dos yudishe folk (The Jewish people) which was founded by the Zionist Organization on his initiative in Vilna.  In 1906 he was working at a position in the Benevolent Society for German Jewry in Berlin.  Theoretically well-versed with technology from his years in senior high school, he was especially drawn to the plan which originated at that time in Zionist circles in Berlin to create a technical school in Haifa.  In the interest of such a plan, in late 1906 he made his first trip to the United States, and his efforts provided considerably for the rise of this technical school in Haifa.  At the tenth Zionist congress in 1911, he was elected to the Action Committee, and from that point he became a leading force in the general Zionist movement.  He spent the years of WWI in America and Canada.  In addition to his Zionist party work, in this period he often published journalistic articles and essays in Yiddish newspapers in New York, especiually in Di varhayt (The truth).  Together with Y. D. Berkovitsh, he edited the journal Hatoran (The duty officer) in New York, and he published in book form: In milkhome-tsaytn, bleter fun a tog-bukh (In wartime, pages from a diary), vol. 1 (New York, 1915), 317 pp., vol. 2 (New York, 1917), 316 pp.  In the first volume, entitled “Undzer eygene milkhome” (Our own war), he dealt with the language fight which arose around the technical school.  In 1920 he became director of the Jewish Agency.  Levin was one of the most important leaders in the Jewish National Fund, and on his assignments over the course of several years he traveled throughout Western Europe, North and South America, and South Africa.  Levin’s own sayings and anecdotes and those of his that were retold by others belong to the pearls of Jewish humor.  He was a sharp polemicist in writing and in speech.  From 1924 he was a permanent resident of Haifa, where from time to time he published articles in the Hebrew press.  He worked for the publisher Devir, and he cooperated with all the campaigns on behalf of the technical school in Haifa and for the Hebrew University in Jerusalem.  From September 1928 he published for several years in Forverts (Forward): “Zikhroynes fun mayn lebn” (Memoirs of my life), which included, in addition to his own experiences and efforts, the most important national and social events in Jewish life from the last decade of the nineteenth century.  This work also appeared in Hebrew as Mizikhronot ḥayai (From the memories of my life) (Tel Aviv: Devir, 1935-1942), 4 vols.  It has also been published in English translation as The Arena (New York, 1932), 305 pp.[1]  A German translation also appeared in Berlin.  He died in Haifa. 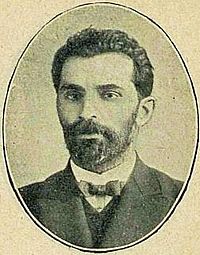 [1] Translator’s note.  This is actually the title of the first part of Levin’s autobiography.  Two further parts, equally long, followed.  They were all published as Forward from Exile: The Autobiography of Shmarya Levin (Philadelphia: Jewish Publication Society of America, 1967), 3 vols. (JAF)
Posted by Joshua Fogel at 10:04