TSVI-HIRSH DAKHOVITS (DACHOWITZ) (October 15, 1885-November 16, 1953)
He was born in Sokole, near Vilna, Poland, into a rabbinic family.  He studied in the yeshivas of the Chofets Chaim and Volozhin, and received ordination from the latter.  In 1922 he emigrated to the United States and served as a rabbi in a Lubavicher synagogue in Brooklyn (1923-1953).  He was popular as an orator.  He was a co-founder of yeshivas and institutes for religious Jews in Poland and America.  For many years he served as vice-president of Agudat Harabonim (Organization of rabbis), an association of Orthodox rabbis in America.  He published articles in the Yiddish and Hebrew press on Jewish issues and primarily on Jewish education, among them in Hatsfira (The siren) in Warsaw, as well as Dos idishe vort (The Jewish word) and Morgn zhurnal (Morning journal) in New York.  In book form, he authored religious texts in Hebrew and Yiddish: Peri shelomo (The fruits of Solomon) (New York, 1926), 149 pp.; Hegyoni vesarapi (Logical and thoughtful) (New York, 1929), 156 pp.  He died in New York. 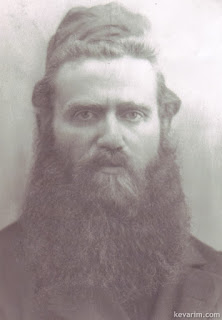