A folklorist and music scholar, he was born in the town of Termakhivka, Ivanoskiy region, Kiev district, Ukraine.  His father Yankl was a private, itinerant teacher in the nearby town of Makarov (Makariv).  Until his bar mitzvah he studied in a “cheder metukan” (improved religious elementary school).  In 1905 he moved to Kiev and took the high school curriculum as an external student.  From 1910 he studied cello, thanks to assistance from teachers who discovered his musical ability.  In 1912 he was playing cello in the Kiev Orchestra.  After graduating from the Kiev Conservatory (attended 1915-1922) and later the Leningrad Conservatory (1922-1924), he devoted himself to musical training in Jewish schools and among working youth, as well as to collecting Jewish musical folklore.  He became choir director and music teacher in the Jewish schools in Kiev (1915-1920), in Leningrad (1922-1924), in the elite Jewish school in the colony of Malakhovka near Moscow (1924-1926), in the Kiev Jewish teachers’ seminary (1926-1928), and in the Pedagogical Technicum (1927-1931). He became an ardent proponent of Jewish musical art, and he was a member of the political-artistic council of the Kiev Jewish musical group “Yidvokans” (Jewish Vocal Ensemble) (1930-1936).  Over those years 1930-1936, he managed the ethnographic section and the office of music folklore at the Institute for Jewish Culture in the Ukrainian Academy of Sciences.  He was later the head of the folklore section of the office of the teaching of Soviet Yiddish literature, language, and folklore of the same Academy (1937-1947).  He received in 1944 the academic title: “Candidate in Musical Science.”

While still young, he began collecting and transcribing Jewish folksongs and folk melodies.  He had the opportunity in 1928 to devote himself to work in a more systematic fashion.  As the director of the office of folklore and ethnography at the Kiev Institute for Jewish Culture, he conducted a large-scale collection of materials.  Over the course of ten years, he assembled over 3,000 musical items of Jewish folklore (songs and melodies).  In the late 1940s, when the Institute (already with just an office of Jewish culture) was shut down and its associates arrested, he too fell under arrest. Miraculously, a significant portion of his collections were preserved, and they constitute a rich source on the musical art of the Jewish people. Among his publications:

(7) Yiddish folksongs of the Soviet period, in Tvorchestvo narodov SSSR (Works by the peoples of the USSR) (Moscow, 1937), in Russian;

(10) Yidishe folklor biz der oktyabr-tsayt (Jewish folklore until October [1917]), a project of the office of Jewish culture in the Ukrainian Academy of Sciences (Ufa, 1942);

A number of songs from Beregovsky’s folklore collections were published in Zalmen Skuditski’s two volumes of Folklor-lider (Folklore songs) (Moscow: Emes, 1933, 1936).  His other writings ready for publication were well-known: “Yidishe muzik-folklor” (Jewish music folklore), 2 vols., and “Yidishe folkstents” (Jewish folk dancing) (noted in Yidishe instrumentale folkmuzik, below the main text on pp. 3 and 10).  His wife, Sore Paz, was a doctor.  He died in Kiev. 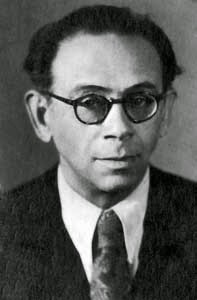